Enjoy a brush with Hollywood in the Caribbean by visiting nautical sites where famous movies were filmed. Here is a sampling of three right here in the United States Virgin Islands.

The Twilight Saga – Breaking Dawn
The one-mile heart-shaped stretch of white sand beach at Magens Bay was the after-dark shooting site for a scene in the 2011 American-made romantic fantasy. Edward (Robert Pattison) and Bella (Kristen Stewart) are two vampires celebrating their nuptials in the moonlight on the sand and in the surf. This was the last scene shot in the movie. Those in the know say the actors wrapped up the night scene with cocktails and stayed on the beach to watch the sunrise.

Scene from the movie Twilight shot in Magens Bay, USVI

The Curious Case of Benjamin Button
Brad Pitt fans take note. In 2008, Brad himself sat on Honeymoon Beach along with Cate Blanchett to film a 30-second sunset scene in this romantic drama, based on a story by F. Scott Fitzgerald of a man (Pitt) that ages backward. Water Island, located in the western end of Charlotte Amalie harbor, is home to a residential community who weren’t all happy when their little island’s beautiful beach was closed for a day of filming. Yet it was only a day, and anyone can visit Honeymoon Beach albeit by boat only as there is no bridge from the harbor. 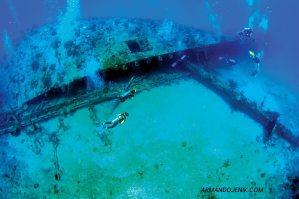 3. Waters of Salt Island, BVI
The Deep
The 1867 wreck of the RMS Rhone off the coast of Salt Island was featured in the 1977 film, The Deep. The thriller based on a novel by Peter Benchley, stars Robert Shaw, Nick Nolte and Jacqueline Bisset. The Rhone scene includes Bisset diving in a T-shirt. The Rhone, a former UK Royal Mail Ship wrecked during a hurricane with over 120 souls lost, is a popular scuba diving site. Today, instead of Bisset, divers can greet a barracuda the locals lovingly call ‘Fang’.T


The Rhone from the movie The Deep. Photo: Armandojenik.com

Be the first to review this item!